Your guide to celebrating the Fourth of July in Chicago

The Fourth of July is more than just a celebration of the Declaration of Independence; it’s also a celebration of everything wonderful about summer in Chicago, from backyard BBQs and lazy beach days to summer festivals and spectacular fireworks displays. If you’re not planning a weekend getaway from Chicago, there are plenty of ways to keep busy as holiday festivities arrive, whether you want to catch live music or watch sparkling fireworks from a river cruise. Are you ready for a fantastic three-day weekend? Plan your Fourth of July celebrations with the help of our Chicago Fourth of July guide.

What is there to do on the Fourth of July in Chicago?

It wouldn’t be the Fourth of July without fireworks! On Saturday, July 2, you can see a show at Navy Pier. If you prefer to avoid the downtown crowds, attend festivals, parades, and fireworks displays hosted by nearby suburbs such as Lake Forest and Mount Prospect. 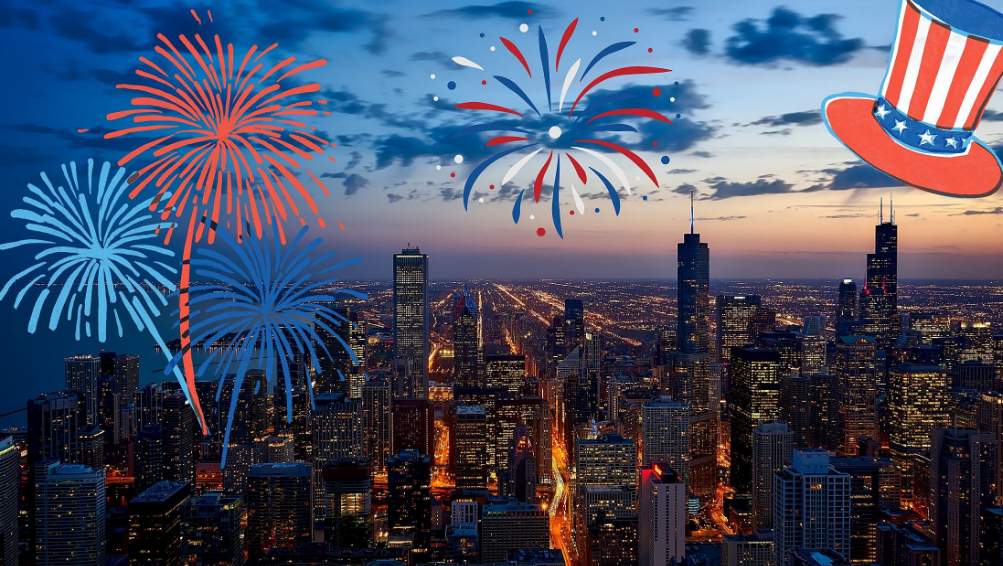 With sunny skies and temperatures in the 80s, Chicagoans will most likely want to get outside and start celebrating the Fourth of July weekend.

From the Grant Park Music Festival to firework displays, this weekend’s street festivals and special events provide an opportunity to take in all of the city’s sights, smells, sounds, and tastes.

Here are some festivals to check out:

Chicagoans can sit back and enjoy the classical music of Saturday’s Independence Day Salute beneath the skyline. The festival is free and takes place in Grant Park in the city.

The 29th annual African and Caribbean festival will take place in Washington Park from 2 p.m. to 10 p.m. on Saturday and Sunday, with music performances, dancing, and plenty of food.

Picnic for the Chosen Few and House Music Festival

Thousands of people are expected to gather in Jackson Park on Saturday for the House Music Festival, which will feature DJs such as Alan King, Andre Hatchett, Jesse Saunders, Mike Dunn, and Terry Hunter.

Looking for a place to watch spectacular fireworks displays in the Chicago area this Fourth of July?

Fourth of July Fireworks Displays in the Chicago Area in 2022

If you want to see a fireworks display in the Chicago area over the Fourth of July holiday weekend, some days may be better than others in terms of weather.

Though showers and isolated storms are expected Friday morning, the weather is expected to clear by Friday evening and into the weekend.

Saturday will be mostly sunny and warm, with highs in the mid-80s, though temperatures will be slightly cooler along the lakefront.

Sunday looks to be mostly dry and seasonal, with highs in the mid-80s, though an isolated storm is possible.

The bigger threat to fireworks displays will be the Fourth of July holiday itself when more rain is expected.

While the day is not expected to be a washout, early forecast models predict showers and storms beginning at 2 p.m.

Here’s a schedule of where and when you can see fireworks around town, including the famous show at Navy Pier.